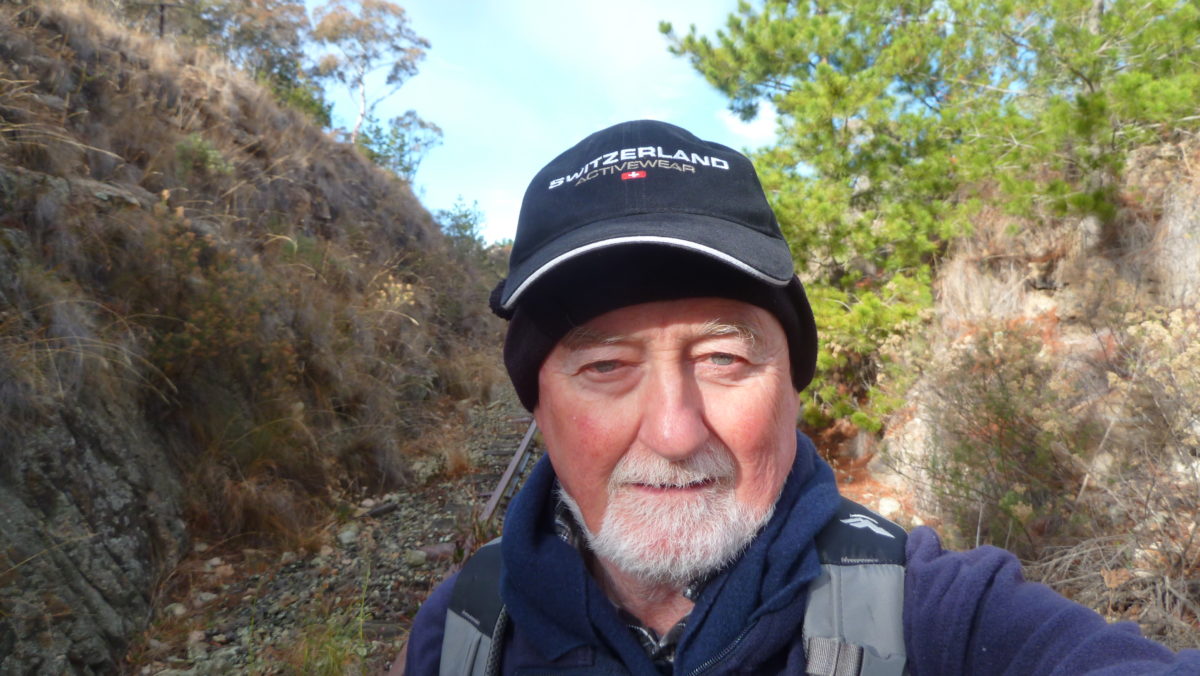 Featured image is of Greg on the Old Railway line

I started this at 9.43AM and finished at 1.45PM, around 4 hours all up. I drove down the Monaro Highway and parked at the turnoff marked as the Old Tuggeranong Road. There is a dirt carpark near the gate and in front of the Paintball Facility. The turn off is exactly 3.2km along the highway south from the Isabella Road turnoff.

From the car park location you can walk south along the Old Tuggeranong Road which eventually takes you to the railways line and close to the old siding, however its a blue metal dirt road and boring although some good views out to the south as you climb. The alternatives are to walk around the Paintball facility along the fenceline then east and up to a track, or walk east a little and then take a track to the north ending up at the same spot as the the Paintball option. Lastly you can head east from near the gate up a formal dirt road that takes you right to the railway although there are a couple of forest roads that leave it and allow you to walk through the pine forest.

Once you get to the railway you have the option of walking along the tracks, as the sleepers are fairly even with minimal drop between them, or you can take the track that usually runs close to the line on the west side. In some places there is a bike or footpad right next to the line in addition to a formal road.

I went initially along the fence adjacent to the highway and around the Paintball centre and then picked up a track that leaves the east-west main road just east of the paintball centre. However after a short distance I took an old track to the east that eventually ended as a footpad to the same location that the main east-west track ends as it reaches the railway line. I had a quick look around but decided to go back down that footpad then took another footpad south to pick up the main east-west track again and then down to its junction with the Old Tuggeranong Road, which I then took all the way to the railway line again and the siding. After looking around the siding, I returned to the junction and took the road what runs along the west side of the railway. It initially climbed a little as the railway went through a deep cutting. Eventually I ended up at the same spot as before.

Instead of following the road next to the line I crossed the line and took an obvious footpad up the eastern side and then up a creek line to the east. It became hard to follow with little tracks everywhere. Then I disturbed a huge mobs of roos and then realised most of the tracks were really kanga trails. I returned but kept high and ended up following the direction of the railway north but high up along the ridge to the east. I eventually reached an old 4WD track and decided to take it down to the railway. Shortly I came across an area that I assumed some youngsters had use to create some jumps and obstacles for their mountain bike journeys. They had built a trail to this location from the south and one continued on to the north. I assumed that the trails went down to the railway at some stage.

I continued down the 4WD but it petered out as it reached the fence next to the railway. I climbed through and went across the tracks and picked up the footpad on its west side. I noticed a larger trail over the fence to the west that ran parallel to the railway also. As I approached the location where there is an underpass under the Monaro Highway into the suburb of Gilmore I noticed a large causeway ahead as we were to cross a small creek. The trail to the west moved away and I continued over the causeway and then took a footpad west, across the other road and through the underpass.

Looking around a large park that is there, I found it would be hard to park although there is a little space on the grass at the end of Corbett Place.

I returned back under the underpass and then turned north along the road that now ran under two large powerlines. I tracked north along it for around 740m, then turned around and went back some 100m before turning east, climbing through a barbed wire fence and then reaching a footpad that ran along the railway. Here the railway was much lower in a cutting. I found a spot that others had used to scramble down to the line and back up the east side. I then was able to get through another barbed wire fence and then joined a formal 4WD road as it turned away from the railway and climbed up to what I thought was Tralee Hill as John Evans had labelled it. I climbed up there and found there was a worker there who had driven up to work on of the mobile phone systems, Telstra or Vodafone. They had labelled their signs a Sandras View. Looking on the topo map it says that a hill to the east which is higher is Tralee Hills, so I have used Sandra View for the comms hill. It provided good view across Northern Tuggeranong right around over Queanbeyan and the hills to its east.

I returned south along the ridgeline following a series of tracks that eventually brought me back to the same creek that I had crossed on the railway earlier but some 340m to its east. I considered that the track I had followed would go further south and then turn down to where I had found those mountain bike facilities a little earlier. However looking on Google Earth later I found that the track was going to join another track that came from over the hill to the south east and went down a ridge slightly to the south and close to the railway line. That would have been a good route. However I went through the bush down the north side of the creek until I could see another gully coming down on my right. So I tracked left to a point overlooking small hidden valley and then crossed the creek easily and went further down through some pines coming on a small open area that had been used as a fireplace in the past. It was then and easy short distance along the creek edge right to the railway and opposite the footpad I had previously taken down to the Underpass. I went down a little to pick up the Powerline trail which I then followed south for 110m. Getting through another open gate I turned right and followed a vague trail south and close to the highway before climbing back up to the powerlines before reaching another locked gate, G10. This was a tough one as the fence was lined with a sort of chicken wire so you could not put your foot on any parts of the fence. Bloody hell. So I hoisted myself on my arms and on the 2nd try was able to swing my legs over and get down. I then was close to large ICON Water tank and Mobile phone Tower. I noted a trail coming down from the east, and figured I could have walked up the fence line maybe 100m and then come down that way. If only! Continuing down a bitumen road there was another turnoff and fence with old gate to go through and then  I was back close to where I had originally started. I went directly south and picked up the east-west main road and was soon back at the car.

This area was historic as well as having some nice walk possibilities.

The area has several large cuttings along the length of railway. These are impressive and I assume the fill from the cutting was used to build a couple of large well constructed causeways across creeks and gullies. Some of the railway would be no longer usable due to pines and gums growing along its sides.

All the land east of the railway line is private property although this has not stopped some locals building some Mountain Bike facilities over there. The land east of the line is also heavily degraded due to poor soil, a high population of kangaroos and some rock wallabies.

I think a nice walk is to park near the Paintball area walk along the Old Tuggeranong Road for around 80m, turn left and go up the main east-west road for 450m to my waypoint J6, then turn right and follow a main road south  east for 375m then connect with a footpad that should take you east to the railway line, then walk south along the road to the sidings area. The return back along the railway line on the sleepers, then eventually walk along the footpad on its west side until passing the causeway, then take the footpad down to the powerline road, then follow that back before turning down past the large water tank, then back to the main east-west track and the car. 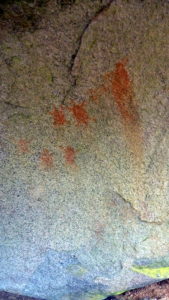 This was a 14.5Km walk in Namadgi National Park to Nursery Swamp area to look at an aboriginal rock art site and work out a suitable walk for Melba Shed for May. It started at a Car Park along the Orroral Valley which is accessed from the Boboyan Rd driving south from Tharwa 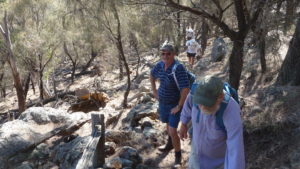 I led this walk, with 5 of us walking . We drove to parking spot in Goorooyaroo NR along Horse Park Drive. Then we walked around part of the CCT to the Hughie Edwards Rest area & RAAF Memorial Grove viewing…

This was a 7.8Km walk taking 2hrs 19mins for a circular route from Coombs, Molonglo, Canberra, Australia along trails to Misery Point and Barrer Hill on the north side of the Molonglo River. This was Melba Shed walk No 219… 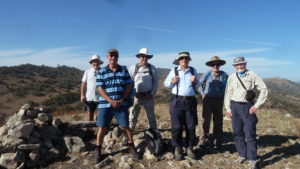 I led this walk, with 7 of us walking . We drove to parking spot at the end of Callister Crescent in Theodore, Tuggeranong. We then climbed on a management trail and a dirt footpad to the top of the knoll… 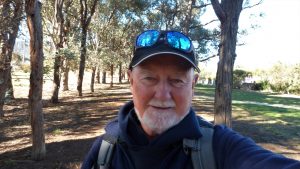 This was a nice style of walk around part of the lower area of Mt Majura plus some grassy trails along the edge of the future suburb of Kenny, in eastern Gungahlin, Canberra. We stopped at McDonalds  at EPIC for… 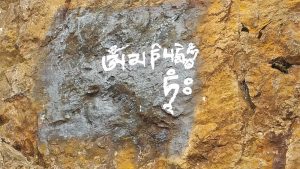 This was a 12.4Km training walk from a car park on Kellaway St, Hackett. I am training for an organised walk on some of the Larapinta Trail in Central Australia. I also walked most of a future planned walk for…