This was a 4.4km and a 4.6Km recce walk in two separate areas along the Molonglo River in Canberra Australia. Both were relatively easy although with issues on access and safety. The walks were around Namarag a special nature reserve and Bluetts Block an area near an expanding suburb that some want to preserve.

I just did these walks to plan for more Melba (Mens) Shed walks. Namrag was based on information from John Evans walks as was Bluetts Block.

I was a little confused about the parking for the Namarag walk. The access is awkward as I either needed to do a right turn across a busy John Gorton Drive into a temporary parking area or drive past it and do a U turn somewhere and drive back. It was busy so I went further along Gorton Drive and turned right at some lights and went along Holborow Ave for about 200m. As its a separate left and right road I could not do a U turn until reaching the next lights and then backtracking down Gorton Drive to turn left into a roughly sign posted temporary car park for Namarag.

Whilst parking the car a lady turned up and asked is this the car park for Bluetts Block. I told her it was not and the place she wanted was way up to the north west on Uriarra Dr as did another lady. However it got me thinking that if I had plenty of time left over I should mosey up there and check it out.

So I headed down the track found my way to Butters Bridge, crossed it and proceeded to follow roughly a route around the area that John Evans had done recently.

I was not greatly impressed as it looked as though they had spent a huge amount on fencing, signs and some landscaping. However it seemed as though the ravages of the recent heavy rain had eroded some tracks and much of the area was still bare or lightly treed or grassed over. A lot of areas were still heavily padded with covering of mesh to protect growth.

RIOTACT has followed the official screed and said “A very special feeling’: new Namarag nature reserve in Molonglo a source of pride for the Ngunnawal people”

The local Government issued a release that said “New reserve precinct opens in #Molonglo. Namarag nature reserve is now open in the Molonglo River Reserve for visitors to explore. This new nature space near Whitlam and Denman Prospect will allow the community to maintain a connection to our environment. The Molonglo Valley is growing quickly, and it’s critical that we set aside places like Namarag to protect and preserve the natural heritage, ecosystems and beauty of the area. This beautiful space has new recreation areas and event terraces for visitors to use, as well as conservation habitats to protect our threatened plants and animals. The design of Namarag has been guided by the Ngunnawal community to ensure this space celebrates Ngunnawal culture and provides an opportunity to share the Ngunnawal story through cultural tourism and education programs. More than 10,000 new trees, shrubs and plants have been added to Namarag by Greening Australia, and we look forward to seeing more added by nearby residents in the years to come. Thank you to the Ngunnawal community, Greening Australia and construction company Complex Co for helping to bring this project to life for all Canberrans to enjoy & learn more about Namarag and other nature reserves at “.

Interesting! They should follow their own words i.e. “it’s critical that we set aside places like Namarag to protect and preserve the natural heritage, ecosystems and beauty of the area”. Then why not do the same with Bluett’s Block.

ACT Minister for Planning and Land Management Mick Gentleman described Namarag as an effort to get the Ngunnawal story across to the wider community. “It really tells a wonderful story about Ngunnawal culture,” he said.”

There is no doubt that it has potential but it will still need a lot of love and care to get to that potential.

I walked around a lot of the reserve and finished back across Butters Bridge fairly early, so I returned to my car and decided to check out Bluett’s Block.

I did this by driving through Denman Prospect and then along Uriarra Road until I could park near a gate where there were many cars parked. There seemed to be several groups of people visiting the area. Details for this route are:- Access is via John Gorton Drive over Coppins Bridge turning right at 2nd lights near school onto Wyndam Ave (note it has a 40kph school zone) then left at a T intersection & along Kondelea Way, then right onto Coladrake Ave to the roundabout then right along Uriarra Rd to park on right opposite Stromlo Forest Park Western Car park.

I met several people on the trails start and ascertained that they were not related to the others. That was strange. Anyway I started by taking a turn onto a track that ran west and parallel to Uriarra Rd. Probably a track to manage a power line above. After around 200m I decided to leave the track and walked through fairly open ground up a slight rise eventually reaching a wide ridgeline. Then I could see a more prominent hill in a NNW direction with ridge to it north side. So I then headed towards that hill over easy walking grassy ground. In 200m or so I came upon a rough track uphill with a fence on its north side which I took to the top. It turned out to have a Trig Point on its northern side, Point ST83. John Evans has called this hill Stringybark Hill.

From here there were beautiful views to the NW around Stockdill Drive area and even west to the Brindabellas. There was a large rural property just to the NW of the site and I guess its a likely site for further Suburban growth. From the 1:25000 map I think this property is Piney Creek, with Spring Valley Farm a further 1km or so to its north. That would be a real pity looking at that view. I also had great views back over Molonglo to Black Mountain and Woden.

I also noticed a distinctive ridge heading NE down towards the Molonglo River. There was also a very obvious track heading back to Denman Prospect from where I had come up to the hill. I thought that would be my next stage of this walk, with a vague idea to then head NE and own to where I could see bulldozers clearing land. I then had it in my head to walk NW along the boundary and after around a Km turn NW to regain the hill I was now on.

So I did walk SE on the track and it connected with the main track that went back to Uriarra Road. I then followed the road NE to a highpoint on the road which then dropped down sharply to reach a gate and fenceline  with the cleared bulldozed land the other side. No choice here, so I headed roughly north for around 300m before reaching another fenceline corner where I climbed over the fence and then headed roughly west through gentle country and then crossing a dry creek bed before climbing up next to another fence onto the ridgeline I had spied from the trig point. The going was essentially easy and I did detected signs of an old track and one old wooden post marker. The main issue was the amount of cobwebs I went through. They were everywhere.

When I reached the top of the ridge I had to continue around the top slightly before I could find an easy way through the fence. I then went along the ridge towards the Trig. Near the trig I found another Post marker. I could not get to the trip because of a sold fence and blackberries but I mad the way up I had used before. I didn’t go back to the trig and talked to some of the other people who returning from the Trig Point.

It was then an easy walk back to the road and along it to Uriarra Rd. My GPS recorded that I was took around 100m for this recce walk.

One sign I saw on a post said that Bluett’s Block may also be known as Piney Ridge or Stringy Bark Hill. Their poster also advertised Bluetts Block Canberra in Facebook where one can see many objections to developments at this location. Its not exactly clear to me where Bluetts Block is

Notes re Map:  GPS Map View provided using Garmin Basecamp on an Open Street Maps (OSM)  base | The area of the walk is covered by the NSW 1:25,000 topo map CANBERRA

This was a recce walk of 9.8Km from Mt Painter to the National Arboretum then back to Aranda Bushland, Canberra, Australia. It was a trial walk to see if we could have a circular walk through these sites

This was a 6.5Km Easy walk from the Melba Shed Car park in Melba, Canberra, south west to Umbagong District Park in Latham to the Stepping Stones over Ginninderra Ck, then to have coffee at Latham Shops, then returning through…

This was a 4 day driving and 43Km walking trip to and around 9Mile Diggings, then back and down to Four Mile Creek Diggings and finally to Giandarra & 12 Mile Diggings. This was all within Kosciuszko NP south of… 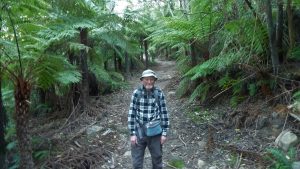 This walk on 24th July 2018 was organised by Drew. He wanted to do it for a long time. We walked from Tilba Tilba to Mt Gulaga (was called Mt Dromedary) on an old 4WD that was built for mining…

This walk was mainly led by Drew McDonald, with 11 of us walking along the path next to Kingsford Smith Drive.  Then through the top of Flynn into Charnwood then down a laneway to have our morning break at McDonalds at…

This was our first walk into the area north of the ACT that borders it. In particular we started in a NSW crown land forested area that the locals have developed as a Trail Run area with a range of…